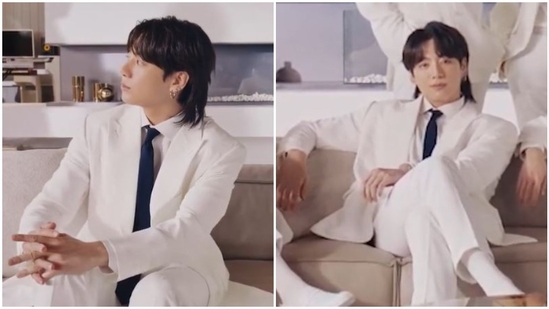 BTS’ RM, Jin, Suga, J-Hope, Jimin, V and Jungkook were just lately featured in an ad. The BTS members have been seen sporting black hair, whereas dressed in white fits. However, the youngest BTS member, Jungkook, sported probably the most distinctive look – a mullet – resulting in reactions from ARMY, the group’s fandom.

“OMG!!! Mullet JK! Tell me this isn’t hair extension,” mentioned a fan. “Jungkook mullet?? I hope these aren’t extensions,” mentioned an individual. “His hair … mullet Jungkook is again,” wrote one other fan.

“For a second, I did not realise who was sitting beside Jin. Jungkook’s mullet hair” tweeted one other fan. “I’m sorry Coway, I do know you talked about one thing in your tweet however all I can give attention to is Jungkook’s mullet,” learn a tweet. “Jeon Jungkook in black hair and on the highest of the A MULLET?!!!! Are we prepared for this?!!” requested a Twitter consumer.

However, several fans identified that it was not actual hair, but extensions. “They’re extensions, his hair is not lengthy but lol, not until he has a magical microphone that may probability his hair to no matter,” wrote a social media consumer. “Recently in the final live performance nothing was seen about this lengthy hair then how in just a few days hair can develop such lengthy..? ? Huh?” requested a fan.

Currently, BTS is awaiting the discharge of their upcoming anthology album on June 10. The album will include the members’ outdated songs and new tracks too. The songs included are Yet To Come, Run BTS, Born Singer, I Need You, Run, Fire, Fake Love, Persona, Moon, Jamais Vu, Seesaw, N.O, Boy in Luv, Danger, IDOL, Dynamite, On, Butter and Life Goes On, amongst others.