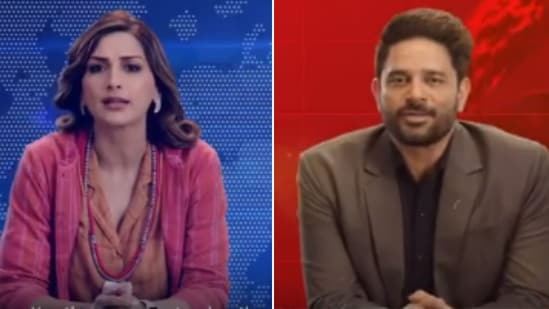 Sonali Bendre will make her OTT debut with The Broken News. The present, which may also star actor Jaideep Ahlawat, relies on the battle between two rival news channels.

Actor Sonali Bendre is all set to make her OTT debut with ZEE5’s upcoming collection The Broken News. Sonali shared a clip on her Instagram deal on Wednesday, asserting the news. The present may also star Paatal Lok’s Jaideep Ahlawat.

Sharing the video, in which Sonali and Jaideep are seen as news anchors, she wrote, “I’m nonetheless processing that that is truly occurring!! Finally… the ‘news’ is out. It feels so good to be again on set, again to the artistic course of, interacting with my co-actors and director… bringing life to a personality. I’m so completely happy to make my OTT debut with @zee5, we’ve finished a lot collectively and it appears like a household. I beloved the idea of this presentation from the get-go and am so proud of the way it’s turned out. Can’t watch for you all to see it.”

The present, an adaptation of the favoured 2018 British collection Press, may also be characteristic of Paatal Lok star Jaideep Ahlawat and Shriya Pilgaonkar, who just lately starred in the Prime Video present Guilty Minds. The Broken News will probably be directed by Vinay Waikul, who had just lately helmed the crime-thriller Netflix collection Aranyak.

According to the makers, the present follows the story of two rival Mumbai-based news channels – Awaaz Bharati, an unbiased, moral news channel, and Josh 24/7 News, which provides sensationalist and invasive journalism and “what transpires between the principal characters in their quest for news”.

The authentic present Press was created and written by author Mike Bartlett, recognized for Doctor Foster and King Charles III and was a Lookout Point, BBC Studios and Deep Indigo manufacturing, co-produced with Masterpiece.

Sonali is thought for a hit Nineties movie reminiscent of Sarfarosh, Diljale, and Major Saab. She was finally seen in the 2013 gangster drama Once Upon A Time in Mumbai Dobaara, in which she had a cameo.