Kriti Sanon Visited Her School After 15 Years. See What She Posted 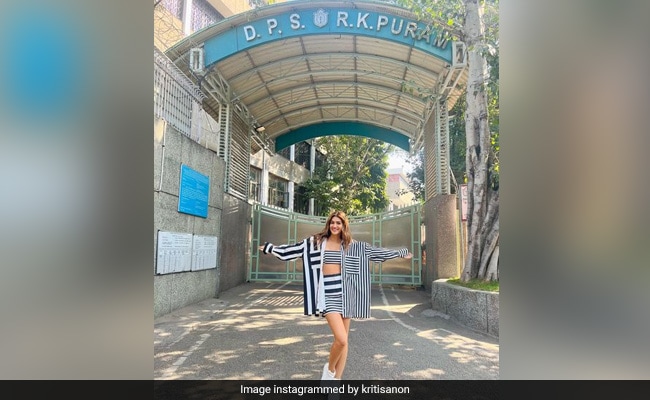 Kriti Sanon visited her faculty and was tremendous thrilled about it. The actress returned to high school after a decade-and-a-half for a really particular cause – to advertise her movie Bhediya. Sharing a picture of herself standing outdoors the gate of her faculty, DPS RK Puram, Kriti Sanon stated, “Back to high school. After 15 years. Such a proud feeling to be again at my faculty to advertise my movie Bhediya. Nostalgic. D.P.S. R.Ok. Puram has given me so much. It really formed the individual I’m at the moment. And it was one of the best feeling to come back again to say “I made it!” She additionally added the hashtag #AlwaysADipsiteAtHeart. Replying to the submit, Kriti’s sister Nupur Sanon dropped a bunch of fireside emojis.

Kriti Sanon additionally shared an Instagram Stories by which she is seen along with her co-star Varun Dhawan. In the clip, Kriti welcomes Varun to Delhi, which she describes as her “residence” and shares that she is de facto excited to go to her faculty to advertise the movie. In a observe, she added, “Too excited to go to my faculty after 15 years.Uff…Can’t clarify. Also, Dilli is a vibe.”

Recently, on the event of Children’s Day too, Kriti Sanon took a stroll down reminiscence lane by sharing a montage video of her throwback photographs. She additionally stated that her coiffure as a toddler impressed her to look in Bhediya. In the caption, Kriti stated, “That’s the place Anika’s look got here from.. My bachpan. Always hold the “chhoti bachchi” alive. Here’s to by no means rising up. Happy Children’s Day!

Bhediya has been directed by Amar Kaushik and can launch in theatres on November 25.