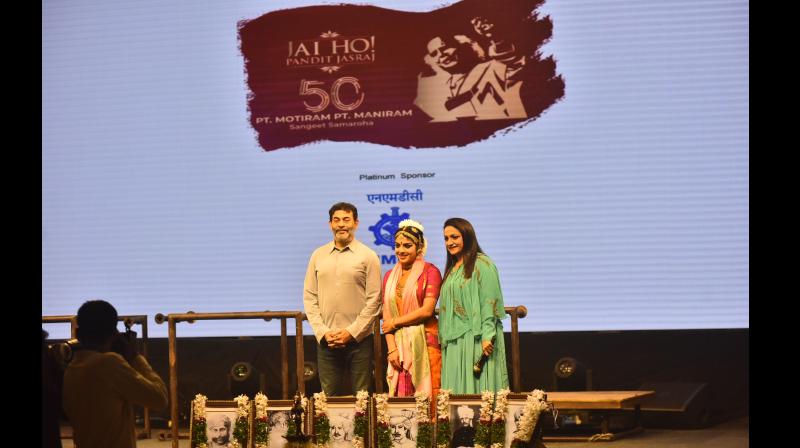 Hyderabad: The third night of the  seven-day ‘Jai Ho Pandit Jasraj fiftieth Pt. Motiram Pt. Maniram Sangeet Samaroh’ offered a beautiful amalgamation of Hindustani classical to semi-classical renditions by artists of various genres on Saturday, which transported the viewers to a soulful world amid mellifluous musical notes and rhythmic beats.

The music pageant is co-organised by HMDA and NMDC at Hitec metropolis and hosted by Durga Jasraj, daughter of Pt Jasraj.

It commenced with an enthralling Bharatanatyam efficiency by Anwesha Das, whose ‘Narasimha Roopa’ dance, choreographed particularly for the occasion, was devoted to the Lord on the Yadadri temple. Her expressions and rhythmic actions had been a deal with. The lighting results in sync with the music created a stand-out expertise.

The temper transitioned with a touching efficiency by Pratibha Singh Baghel, who closed the night together with her soulful ghazals.

Pratibha sang a ghazal by Sudarshan Fakir, ‘Ishq me ghairat-e-jazbaat ne rone na diya’, which received over the hearts of the viewers. She adopted it up with ‘Faasle ais bhi honge’, initially sung by the legendary Ghulam Ali and penned by Adim Hashmi and ‘Dard badhkar fugan na ho jaaye’

Other eminent co- artistes had been Sridhar Parthasathy on the mridangam, the flautist Ninad Mualokar, tabla gamers Ramakrishna Karambelkar and Ashish Ragwani with Akhlak Hussain Varsi on the harmonium.