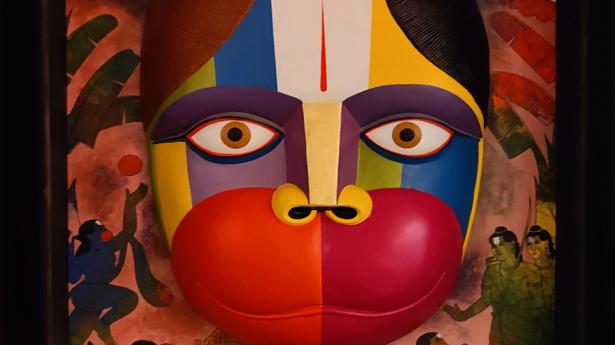 A definite facet of Appam Raghava’s paintings is the robust color palette he makes use of to discover the bhakti bhava (devotion) of Hanuman, by the ‘Story of Invincible’ series. The artist who works from his studio in Amangal, Mahbubnagar district, Telangana, is showcasing work, sculptures and installations at OneDot6, a gallery and retailer owned by inside designers and designers Aamir and Hameeda Sharma in Hyderabad.

The work and sculptures are head turners. A fibreglass sculpture of Hanuman is mounted on an acrylic portrayal wherein the artist narrates chapters from Hanuman’s story – his leap in direction of the solar as a baby, assuming that the solar was an enormous ball; the occasions that occurred when he crossed paths with Surya and Indra; Hanuman carrying the Sanjeevani mountain, and later searching for blessings from Rama and Sita.

Raghava conceptualised the series 4 years in the past, aspiring to painting Hanuman’s devotion to Rama as a manifestation of Dasya Bhakti and Padasevana. This is the artist’s first full-fledged series impressed by mythology: “My earlier artworks, since 1996, had been on social themes and likewise mirrored tribal life. In later years I needed to discover mythological narratives.”

Amir and Hameeda Sharma with the artist Appam Raghava. In the background is the paintings of Lakshmi
| Photo Credit: Special Arrangement

The artist additionally depicts the story of Goddess Lakshmi by a fibreglass construction mounted in opposition to a portrayal that narrates her story. He intends to work on a series on Lakshmi in the close to future.

A fibreglass mask takes him 20 to 30 days whereas a portrait takes 4 to 5 days. “I get pleasure from working with main colours — crimson, blue and inexperienced and some different colours I derive by mixing them. It has developed into my signature model.”

Growing up in Amangal, Raghava watched his father depict rural themes in his paintings. “For any big day within the village, my father used to make the Ganesha idols. When he noticed that I appreciated to attract, he inspired me to be taught artwork formally.” JNTU College of Fine Arts, Hyderabad, opened up Raghava’s world. He mentions with pleasure that his daughter is now pursuing nice arts and his son can be inclined to artwork.

Movie posters of the Eighties had been additionally an inspiration for Raghava in his early years: “The fonts utilized in some of the film posters, just like the Krishna-starrer Simhasanam (1986), had been stylised and would convey one thing concerning the movie’s story. I used to copy these fonts with the colours and drawings surrounding them.”

Raghava visits Hyderabad often to show his work or to fulfil fellow artists: “The metropolis is all the time busy; I want the calm rural environment of Amangal,” he says.

(Story of Invincible is on view at One Dot 6, Jubilee Hills, Hyderabad, until May 29.)