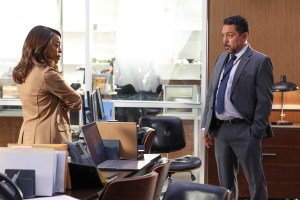 Niecy Nash-Betts makes her debut as Simone Clark within the first trailer for ABC’s The Rookie: Feds (above) forward of the present’s premiere on September 27.

Simone is a former steerage counselor dwelling her dream of turning into an FBI agent in The Rookie spinoff—making her the oldest rookie within the company. Taking on the position will include challenges as many doubt her capabilities, primarily her boss, Special Agent Matthew Garza (Felix Solis). Fans of the mothership sequence The Rookie can be happy to see sequence star Nathan Fillion‘s John Nolan, who Simone apparently has on pace dial, will crossover into Feds.

“The reveals exist throughout the identical universe with them in the identical metropolis; the design in creating them was all the time to have the ability to crossover forwards and backwards,” mentioned co-creator and government producer Alexi Hawley through the present’s TCA panel on Wednesday. “That [crossing over] undoubtedly exists not simply with Nathan and Niecy however with all of the characters in each reveals. Police and FBI work hand in hand loads so being able to have the enjoyable of the characters you’re keen on bouncing forwards and backwards is de facto a part of the present.”

Simone isn’t one to underestimate despite her lack of expertise as a federal agent. The trailer proves she is simply what the company must shake issues up: somebody who thinks outdoors the field with connections in all the fitting locations.

Watch the trailer in full above.