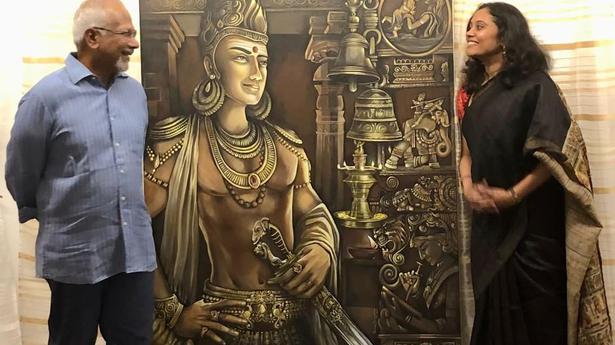 Arulmozhi Varman — the charming prince of the Chola Dynasty and the central character of the traditional ‘Ponniyin Selvan’ — stares out of a larger-than-life canvas at an ongoing artwork exhibition. Archana Karunkaran, a dentist and self-taught artist, has displayed 32 work at her first solo artwork present that was inaugurated by director Mani Ratnam and Suhasini Maniratnam on Thursday night in Chennai. “I’ve a Ponniyin Selvan painting and he [Mani Ratnam] is at present engaged on the film Ponniyin Selvan: I. We linked over that,” says Archana, including that the couple preferred her work and likewise purchased a few of her work.

The assortment on show consists of three sequence amongst others. While a black and white sequence captures individuals and feelings, Archana’s zentangle sequence presents majestic animals like elephants and a lion in intricate element. “I work with acrylic on canvas, fineliner on paper, water colors and sparingly oil,” says Archana, earlier than pausing to speak about her sequence on sculptures of South India. “Most sculptures, be it Nataraja, Ganesha or Hanuman, are monochromatic in gold or brass. What would these topics appear like when lit up in a riot of colors? I’ve explored this idea in vivid hues.”

Archana’s work will be adopted on Instagram on her deal with @surreal.impressions.

The exhibition is on until Sunday at CP Art Centre, Alwarpet, from 10.30am to 6pm.